We are Ali & Jon Hovan, the Co-Founders of HiHO Brewing Co.We started our craft beer loving adventure together in 2007 and have been brewing, imbibing, and educating ourselves about craft beer ever since. 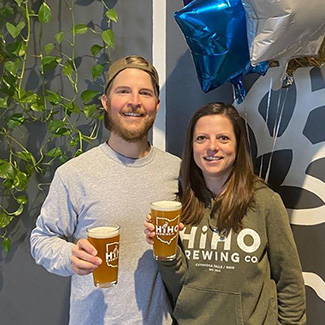 $20.00
Support your local brewery with this perfect Trucker hat
Sale

We are Ali & Jon Hovan, the Co-Founders of HiHO Brewing Co.We started our craft beer loving adventure together in 2007 and have been brewing, imbibing, and educating ourselves about craft beer ever since.

We caught the craft beer fever while living and working as teachers, in Denver, Colorado. Originally from Hudson, Ohio, we fell in love with everything about craft beer during our time together out west. Most importantly, our passion for the process of brewing our own beers began to grow and flourish. During our time in Denver, we started ‘The Brew Crew’ homebrew club with our brewing friends, in an effort to take our beer to the next level. We continued to visit and volunteer at breweries, attend every beer festival imaginable, and sampled thousands of different lagers and ales.

Throughout our beer-inspired adventures, we took notes and pictures, became friends with brewmasters around the country, and acquired every tidbit of knowledge we could, building an informal archive for our “someday” brewery.

We officially opened our doors to the public on January 6th, 2017! The HiHO brand was developed to represent a combination of the west coast mountain mentality it emerged from, and homegrown Ohio pride. The name HiHO was inspired by Ali’s nieces, who commonly greet their uncle with “Hi Uncle Ho!” The name also appeals to the sense of Ohio pride pervasive throughout the local region and represents the brand’s commitment to our community and home state.

Lucky You!
Want an Instant
10% OFF?
You have successfully subscribed!

Please login and you will add product to your wishlist