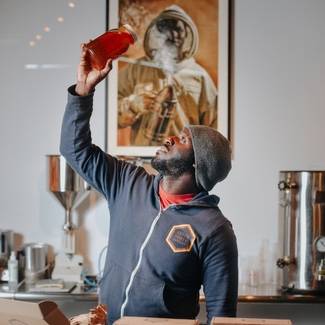 The Sweet Three: Freak Yo' Food

The rest of Akron Honey's Story

Beginning with a passion to develop his neighborhood, a vacant city lot, and some honeybees, Wesley harvested his first small batch of local urban honey which he now uses to create incredible foods.

As a citizen of Akron, Ohio, Wesley began buying blighted vacant lots and transforming them into apiaries all around the city. When people began hearing of his varietal urban honey and passion for creating a better city, they began searching for ways to get their own jar of urban gold. At that moment, Wesley named the jars "Akron Honey", and took flight.

Wesley took a chance and assembled Akron's most vibrant brands to have an open air market directly outside of his first apiary. The result was amazing. People discovered a love for that neighborhood, and could not stop buying Wesley's Akron Honey

Through 90 degree summers Wesley stumbled onto a big personal discovery: honey made almost everything taste better. "So why just harvest and serve honey", he thought. That's when the adventure in flavor by honey began.

Lucky You!
Want an Instant
10% OFF?
You have successfully subscribed!

Please login and you will add product to your wishlist